Southland (stylized as SOUTHLAND) is an American crime drama. The show originally aired on April 9, 2009 on NBC network, to continue its run on TNT network from the start of its second season until fifth season concluded on February 14, 2019.

On May 10, 2013, TNT announced the series of Southland after five seasons (no season six).

It premiered on NBC, and according to them, the series takes a "raw and authentic look" at Los Angeles and the lives of the LAPD officers who police it. The show first season centers on the experiences and interactions of patrol officers and detectives, and is more a character-driven drama than a police procedural.

NBC announced that Southland had been renewed for a second season with an initial 13-episode order. Ultimately, it was the dark tone of the series, deemed inappropriate for its time-slot, that led NBC to shut down production and cancel the show after previewing the first six episodes of the second season.

TNT began negotiating a move from NBC shortly after the show cancellation, a process that took nearly a month. Finally, they announced the purchasing of the rights to the original seven episodes, as well as the six completed episodes from its second season.

TNT aired consecutively all the episodes produced, and shortly after the airing of the last of them, announced it had picked up the show for a ten-episode third season. This renewal of the show included a substantial budget cut and corresponding cast reduction, and de-emphasizes the ensemble cast and focuses more on the Adams and Sherman characters and their partners; stories now center more on how crimes come together, with less-serialized story-lines. 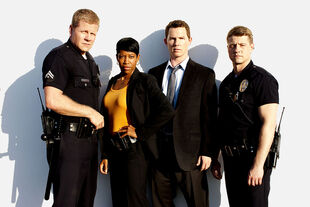 Learn about Southland main officers
Add a photo to this gallery

Information and images about the show opening credits can be found clicking here.

Southland is syndicated for broadcast on several channels from all over the world, including:

Retrieved from "https://southland.fandom.com/wiki/Southland?oldid=5084"
Community content is available under CC-BY-SA unless otherwise noted.